The NetEnt software is widely used in online casinos. NetEnt casinos are very popular and we want to take a look at the 20 best Net Entertainment slots here. Players appreciate the large portfolio of slots that convince with good quality. Furthermore, Net Entertainment offers the possibility to play the video slots via downloadable software as well as via instant browser version. Most players prefer the Flash version, which can be played directly online after login.

In addition to its large selection, Net Entertainment is known for its good pay-out rate, which is normally significantly larger compared to other softwares. The variance is a little bit higher at Net Ent slots than with comparable slots, but the possible winnings are much higher. 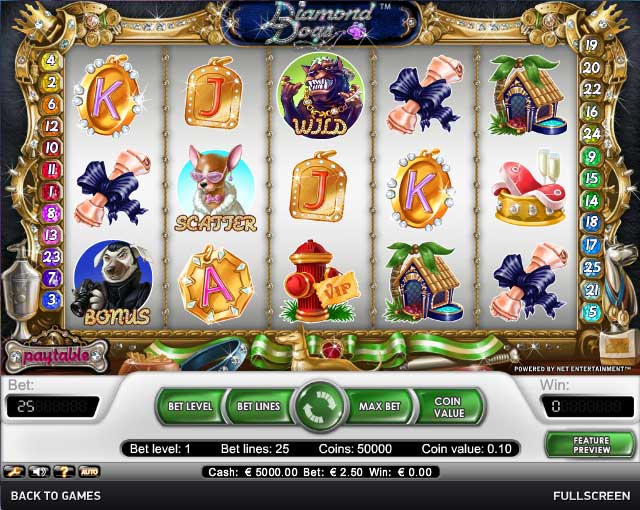 The funny dog ​​symbols give Diamond Dogs a distinctive look and if the ripped off dog with sunglasses and white jack can be seen three times, the player can look forward to a bonus round par excellence. Also, there are free spins and a wild symbol that acts as a wild card. This not only sounds promising, but it is. 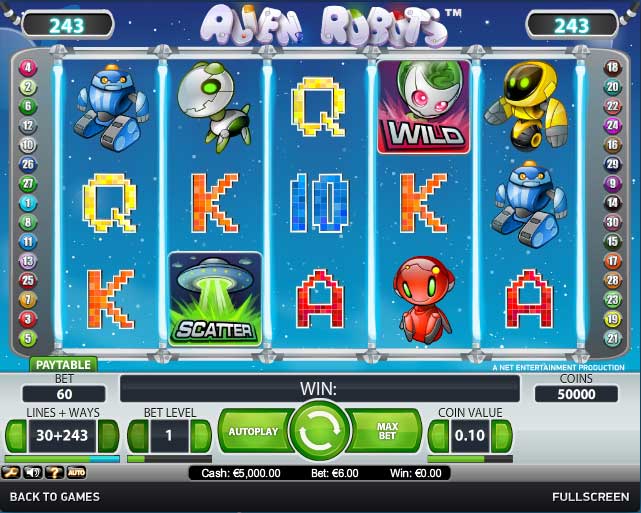 The Alien Robots slot is a fun machine with aliens. Up to 10,000 coins can be won on 30 pay lines. With just a single click. The 30 pay lines contain 243 ways to win, so the drawdown at alien robots is significantly shorter than in other games. This makes this game one of the software giant's most popular slot machines. 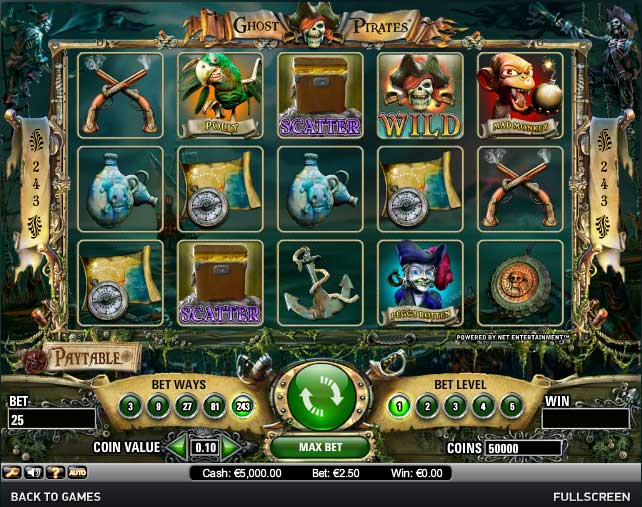 A game with a pirate theme like Ghost Pirates should not be missing from any list of the best casino slots. Every software releases at least one such machine. Usually more than one. That's what also Net Ent does. There is a scatter, free spins and a wild joker symbol that can bring some winnings on the 243 winning lines. The slot is very flexible in use and both big and small winnings are possible. 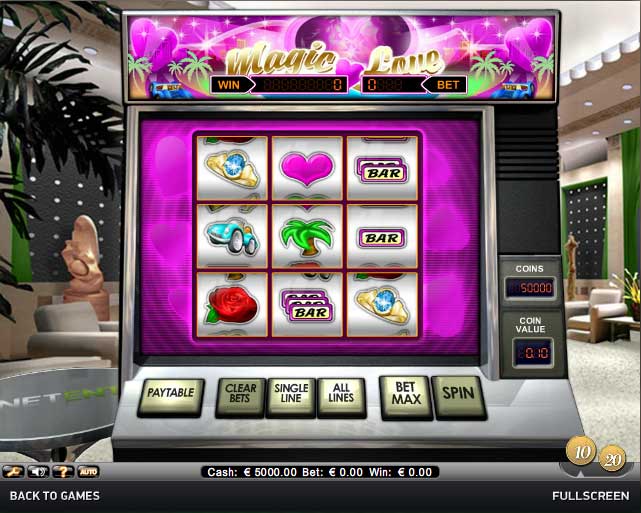 If you are looking for a penny slot especially for women, Magic Love can be your choice. In the classic manner, Magic Love only has three reels and can be played with a few cents. Nevertheless, Magic Love doesn't miss anything and is indisputably one of the top slots. 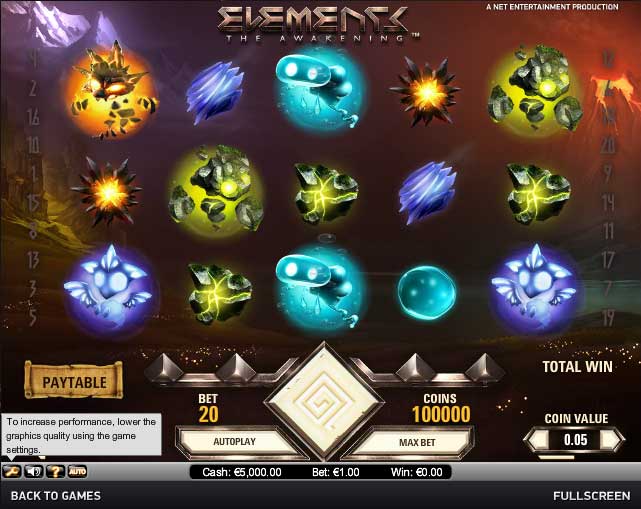 You don't need to be a physicist to be successful at Elements. All you need is a little bit of luck and the Elements on the right payline. The wild symbol appears on reels 3, 4 and 5 only, but extends vertically across all four rows. This results in super winnings on several lines at the same time, which makes Elements a top game for good reason.

15. Champion of the track 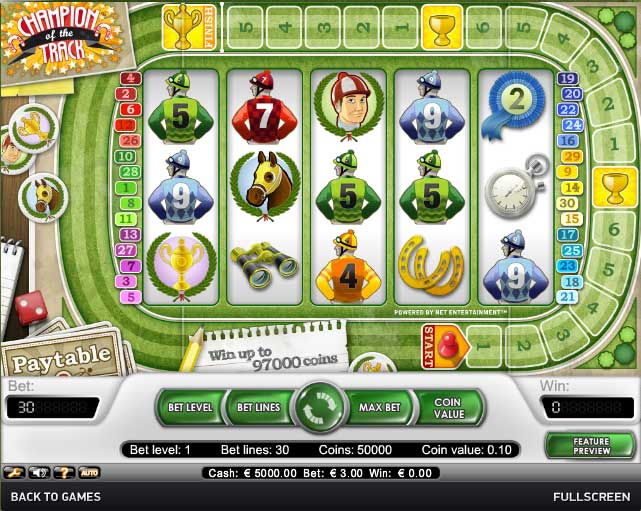 Champion of the track has everything you would expect from a good slot. The racecourse theme is well created and the graphics are of solid quality that are convincing. Features are a bonus round, wild symbol as a joker, free spins and a scatter. A possible main prize of 10,000 coins make this fast game a top title. 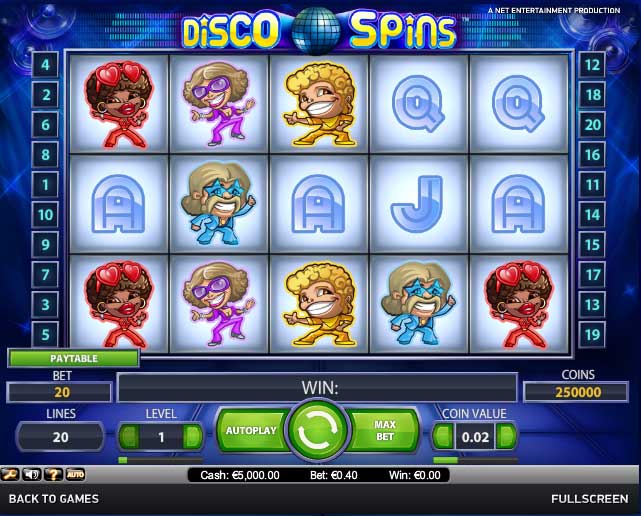 Disco SpinsTM is extroverted and striking with many bright colours. Five reels with 20 pay lines provide all kinds of hustle and bustle and the dancing figures as symbols create a party atmosphere with the disco music in the background. Ok, that was a little over the top, but the slot is still fun. 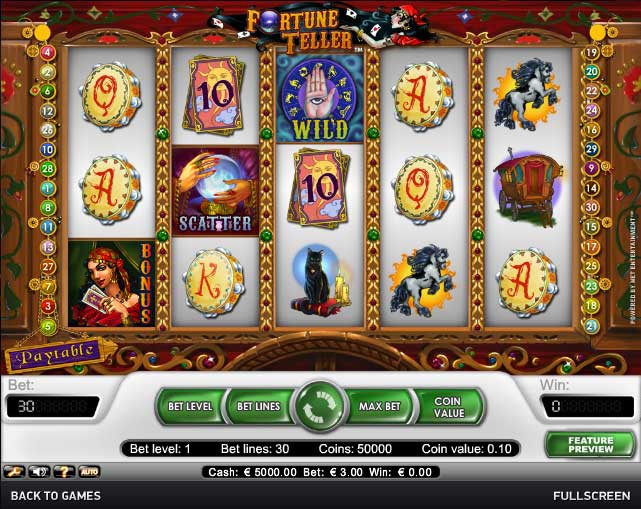 Fortune Teller has scatter, wild symbol, bonus rounds and free spins. And that often leads to top profits. Even if the maximum bet per round is only 60 euros and Fortune Teller is not an option for the ripped-off high roller, this is enough for the majority of the players. The slot is played on average stake of around 1.80 euros. 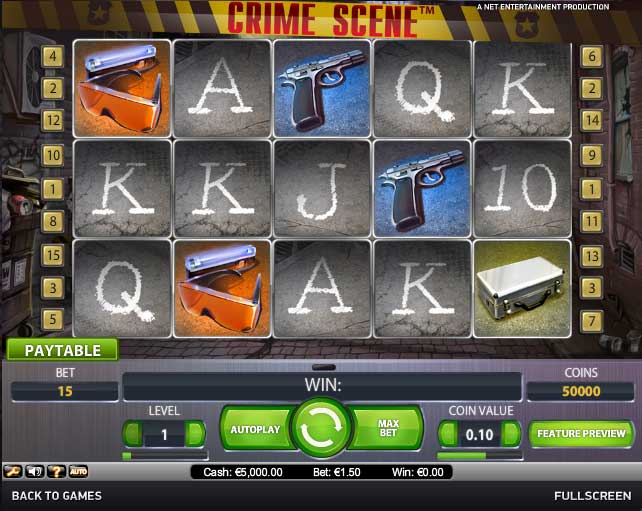 Since 2012, Crime Scene has become indispensable and even today it is one of the most popular slots on the net. The story of the bank robbery is quickly explained and the loading times are bombastic. Wild symbol, scatter, free spins and an exciting bonus round can give player the highest winnings. 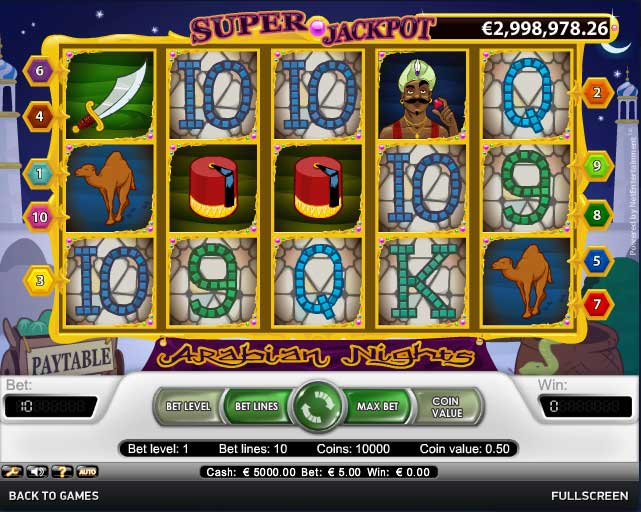 Arabian Nights is played on 10 pay lines. The slot with the attractive Arabic appearance is known for good pay-outs. Free spins, wild symbols and scatters ensure good winnings. Arabian Nights is one of the most played Net Ent slots. 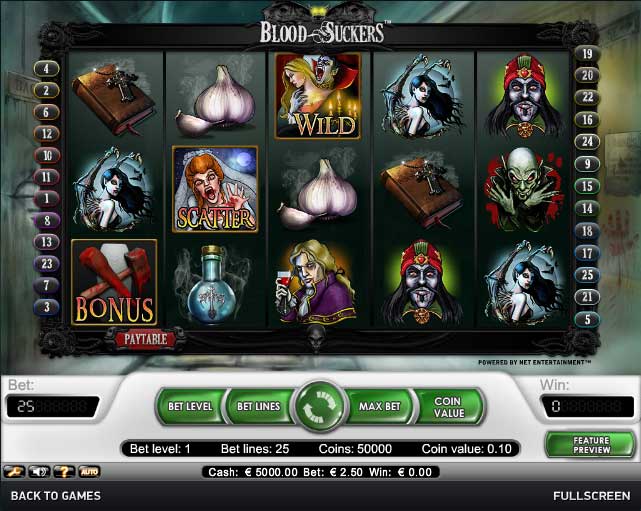 The classic. Bloodsuckers guarantees a gaming experience at the highest level. The attractive scary theme of the bloodsuckers quickly captivates all players. In the battle against Dracula, thousands of coins can be won on five reels with just one click and although Bloodsuckers has been on the market since 2009, it is still one of the hottest video machines. 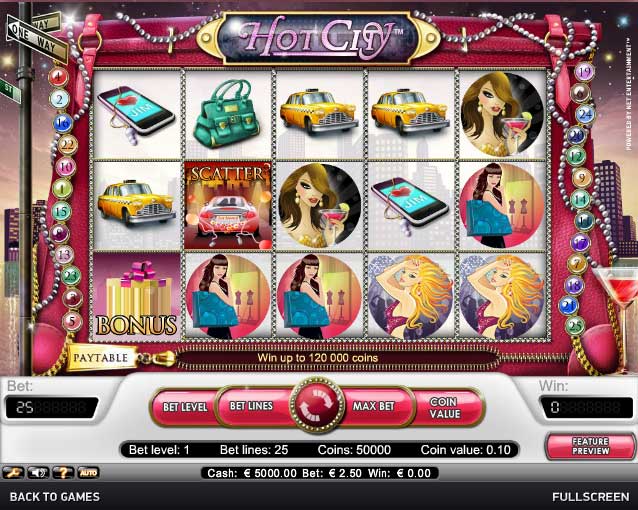 It gets really hot at Hot City. 25 active lines on five reels and all sorts of hot symbols in the form of attractive women make Hot City a perennial favourite. It only gets hotter in the bonus round, in which the player has more hot action and winnings can quickly become five-digit. 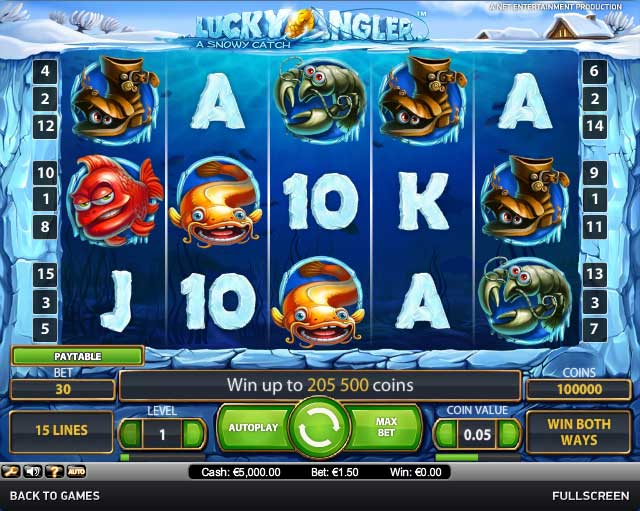 At first glance, Lucky Angler has nothing to do with this listing. At second glance, however, you know why Lucky Angler ranks in the list of the best Net Ent slots. Because once you have loved this underwater slot machine with its simple gameplay and decent winnings, you will have a hard time turning away from it. This slot is one of the games with the bet Net Ent bonuses. 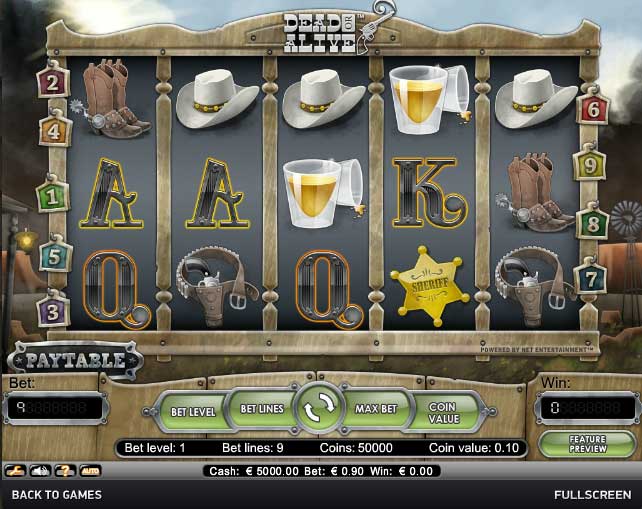 Dead or Alive is now one of the absolute classics in Net Ent online casinos and this slot machine has become an integral part of the best NetEnt slots. Short and crisp is played on five reels with nine pay lines. Great videos and appealing graphics and animations, coupled with top prizes make Dead or Alive one of the software giant's most popular games. 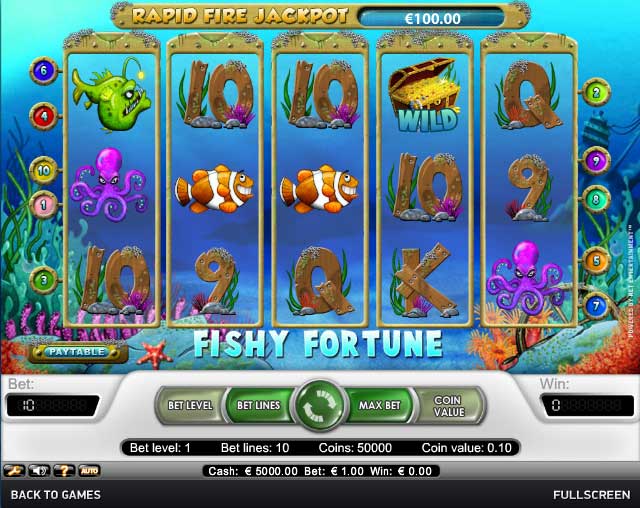 The next game, Fishy Fortune, is going fishy. The 12 different symbols are of good quality and all have to do with fish. Only 10 pay lines result in somewhat rarer but significantly higher winnings. On average, Fishy Fortunes is played with a stake of 2.40. It gains great popularity through its progressive jackpot, which increases until it has been hit by a lucky player. And then it really pops. This makes Fishy Fortunes one of the most lucrative Net Ent slot machines. 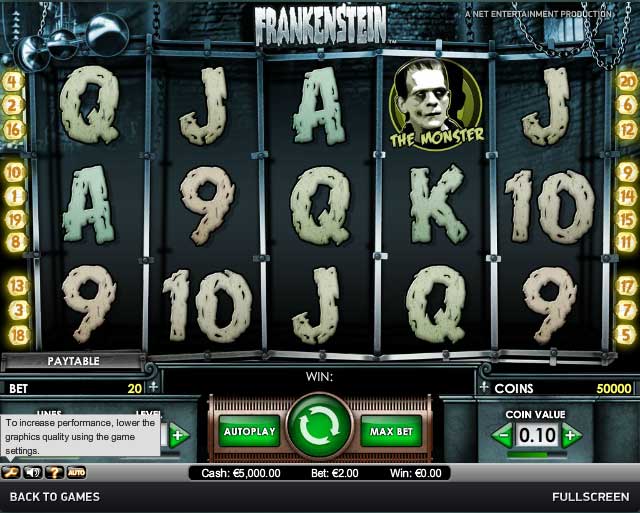 Creepy continues with the Frankenstein slot. Everyone knows the scary character Frankenstein from TV films. The fact that it also occurs in slots underlines the high popularity of the artificial figure. The slot is particularly profitable thanks to Scatter, Wild and its free spins feature. The free spins are in great demand because they are played with a multiplier and the winnings from them are multiplied accordingly. So really good profits are possible. 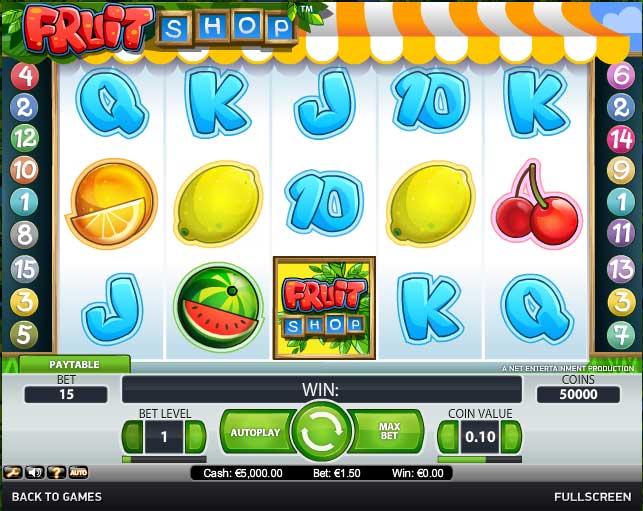 The fruitiest slot in the series of the best Net Entertainment slots is Fruit Shop. Fast, straightforward and fruity. This is probably the easiest way to describe Fruit Shop. This machine has brutally few dry spells and you win more often than average. Even if the winnings are often only reinserted, Fruit Shop can be played super and with the help of free spins and wild symbols, high winnings are also possible.

3. Jack and the Beanstalk 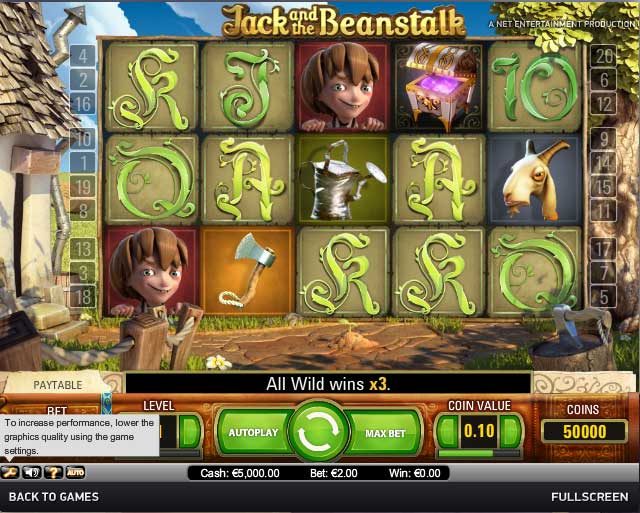 The cheeky little Jack in Jack and the Beanstalk enchants his players in this game who keep their fingers crossed for the big win. And a big win is definitely possible with this machine. It can be played very flexibly and regardless of whether with a few cents or a three-digit euro amount, everyone can play their rounds as they please.

Jack Hammer, the classic. This colourful slot machine game is super easy to play and fantastic winnings with exciting gameplay ensure all sorts of action. In 2016 the third generation of this game series came out and is still one of the most frequently played slot machines ever. 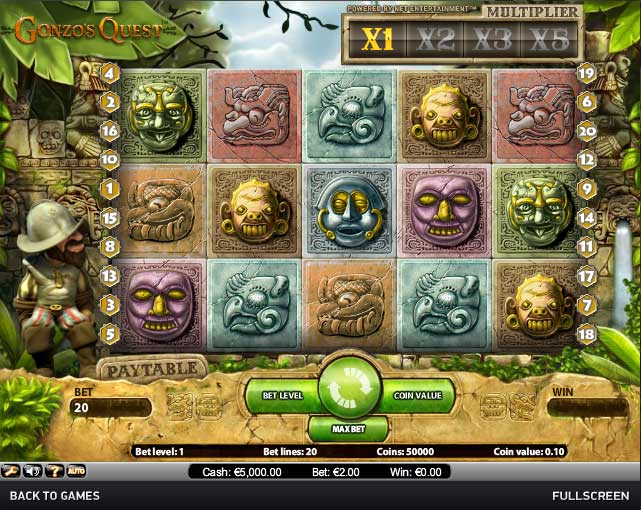 The concept of Gonzo's Quest was totally new when the slot was released. After a line had been won, many of the stones were removed and new ones tipped in from above. There was a lot of surprise and nobody really believed in that great feature. But critics have been disabused and NetEnt's success proves it right. High winnings with just one spin and the fact that they are possible with only mini bets make this game hot. And so Gonzo’s Quest is still one of the most frequently played slot machines on the net and definitely the most successful Net Ent slot ever.

Since the slots listed are the best that Net Ent currently has to offer, all 20 titles can of course be found in every online casino with this software. For a good start bonus, take a look at our list of all Net Ent bonuses. And if you still haven't found what you are looking for despite this great range of games, then take a look at our list of the best Microgaming slots.

Prime Slots
9.0
"primeslots is a decent site and one of the good..."
Sloto'Cash Casino
5.8
"It is a decent online casino but withdrawals take up..."
Cashpot Casino
2.6
"the online casino does not pay. it is a scam..."
LuckyNiki
6.6
"Luckyniki is a great casino offering an amazing selection of..."
Nomini Casino
10.0
"won a lot recently being still high must say that..."