How to play Baccarat 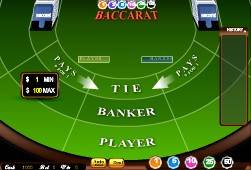 Baccarat is played on a big table similar to that of craps. The table is usually surrounded by three casino dealers and can be played by twelve or fourteen players. Gaming is both land-based and online where there is a virtual dealer. It comprise of two principals bet to be made; banker or player and a rarely used standoff principal. How to play baccarat and win entirely relies on the simple rules and luck.

The gaming session commences when cards have been dealt. Some casinos allow the players to deal cards in turn while others have casino dealer to deal the cars. However, in online based Baccarat, the cards are automatically dealt by a virtual dealer.

There are three basic tips that you need to stick to. These include: choosing a table with few decks as possible, most casinos plays six and eight decks so in such a case six is the most convenient and in case there is one with fewest decks, go for that. Secondly, look for a low commission table, the standard casino betting on banker is usually 5% but there could be lower commission rate in some which is ideal for you. Lastly, bet on a banker and a void bet on a tie as the tie bonus have a higher house edge.

Upon mastery of the rules, the gaming session begins. Every player including the one dealing may bet on either Banco (banker) or punto (dealer) but it has always been the rule for the dealer to bet Banco. Players may not involve themselves in dealing there by passing the ‘shoe’ to the next. The shoe will then remain with one of the players for as long as the bank wins and in the event of punto winning, the shoe passes on the next player and the game continues.

Usually, two hands are dealt and you bet which one will win or they will tie. Each dealt hand has a minimum of two and a maximum of three cards. This the heart of the game where the person dealing puts two cards, face down, tucked under the shoe and then gives the player who has the biggest bet on punto in the same manner of secrecy.

The punto player then has a look at the cards and then hands them back. The person dealing will then goes ahead and turn the cards of both hands. This is usually followed by announcing of the outcome and the winner by one of the official casino dealer.

In the gamming session, when either hand has a total of eight or nine the situation is referred as natural with the nine being the highest. In such case, no more cards are dealt. On the other hand, a no-natural situation might make casino dealer to instruct a third card dealing. This usually follows standard set rules for all casinos.

Playing can be so interesting. You can learn how to play baccarat best by sticking to the rules of the game. Identify yourself with casinos that have eCOGRA seal.