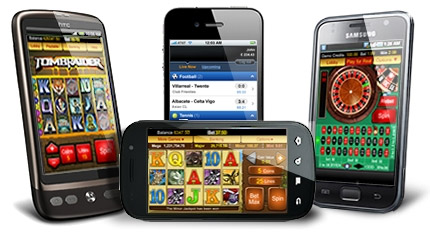 In an effort to keep up with the growing online casino industry and to meet the needs to the punters, the casinos are improving on what they are providing. This is in form of introducing new games that can be played on the website while using both desktops and mobile devices. Below are some of the online casinos that have launched games that can be played on mobile devices.

The Italian online casino has launched two mobile games while collaborating with Game360 a software provider. The first mobile app is on table games such as Roulette, 3 Reels Hi-Lo and Black Jack. The other app is a four slots collection namely Magic Scarab, Golden Pearl, Lucky Day and Angry Fruits. The mobile applications can be played on Android and iOS Smartphones and tablets.

Francesco Mastantuoni, GameNet General Manager said that he is proud of the collaboration, which has enabled the company to enrich its mobile offer and to improve competitiveness in the market. This is because players will now have more choice of mobile games to play on their mobile devices.

He further added that GameNet is increasing its investment in mobile games and he believed that the partnership would help to get more customers and to ensure that the existing customers remain loyal. The new mobile apps have been created using innovative graphics and they are easy to use. They are also compliant with responsible gaming and therefore, he is confident that they will be successful just like the last year’s apps.

talian punters can now access mobile and flash games from Play'n GO, an online gaming software provider. The games can be accessed on the website of Microgaming, one of the major online casino operators.

The General Manager of Microgaming Marco Castaldo said that the company is excited because it is the first one to offer games from Play'n GO in the Italian market. He said that Microgaming is looking forward to grow the Italian online gaming market particularly those played using mobile devices.

The CEO of Play'n GO, Johan Tornqvist said that the launch of the games in the Italian market is an important achievement that will lead the software provider for more growth. He observed that Microgaming was the best partner to launch the games with because the games will reach out to more than one hundred websites at a go.

The online casino has introduced 20 new games that can be played on mobile and on desktop on its SoftSwiss gaming. The games are from the Amatic Industries, a German supplier. Manager of Bitstars, Nikolica Vadaski said that the launch of the games would continue to make strong the development of the company’s products. It will also increase the choices that the players have and the level of entertainment while also increasing the competitiveness of the operator in relation to its competitors. He also noted that Bitstars is among the first online casino operators to use the Amatic games online. This is because Amatic is commonly known for provision of games for land gambling.