One more successful year for Bet365 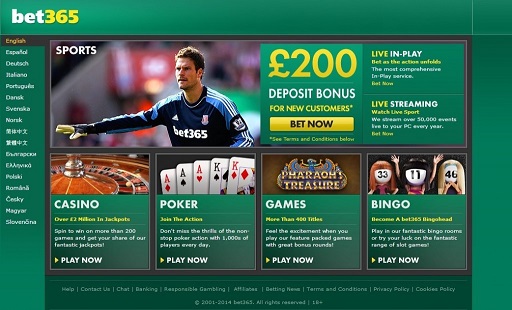 Bet365 is an online gambling operator from Great Britain. Reports from The Sentinel newspaper has it that the giant is growing stronger since it has employed three hundred more staff members and recorded more profits in the past year. Its total current staff is now 2,686 and it is planning to move into a newly built headquarters located in Stoke-on-Trent come 2016. The headquarters will have cost 30 million Great Britain Pounds.

Founder and joint Chief executive Denise Coates said that she was pleased to report the continued large growth that the company was achieving on that period with total revenues from gambling activities of the group showing an increment of 38 %. Coates gave credit on retention and increase of customers to bet365 to the commitment on research and development, including product developments and customer promotions that are good.

Despite the increase in profits, it lost almost £ 5 million in the Stoke City football club investment. The good news is that the loss was an improvement from 2013 loss of £ 31million. The company does not keep the money to itself since according to the Guardian, this year it has donated £ 105 million to bet365, its charitable arm. The money has been used to support 20 charities for work in the UK and abroad. Some of the projects supported are helping of those suffering from HIV in Africa and the Philippines victims of typhoon.

The company has paid dividends totaling to £ 225 million for the past 6 years and Coates has received half of it. Last year saw her pocket £ 13 million. According to newspapers reports, she gets more than £ 60 million in dividends and pay from bet365, the online business that she started 14 years ago from a car park situated in Stoke. In 2011, Coates received a CBE award. This year she was on the list of Forbes billionaires with her wealth estimated to be at £ 390 million. The Sunday Times estimated her family wealth to be at £ 1.2 billion after a few months.

Bet365 operates in various countries where it holds betting licenses, which includes Denmark, Spain and Australia. It also has licensing from Gambling Commission of UK and also pays a 15 % tax. That means that it will not be affected by the new UK licensing system that has been introduced for online gaming operators. The regime is for operators who are not registered in UK, but they benefit from the online players in the UK.

The profits and the growth of the company is a sign that online gaming is capable of generating a lot of revenues for the investors and the country. What the states need to do is to ensure it is properly regulated to reduce the instances of vices related to wagering.